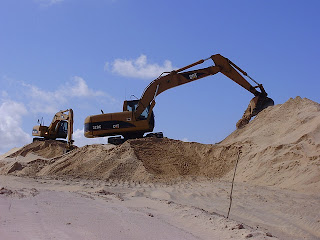 This communication was received earlier today from Ciaran Maguire (documents were attached and are available should anybody wish to see them - email info@OverseasCafe.com - the picture to the left is referred to in the text below):

"I have attached documentation for your perusal. I understand that you have a keen interest in Palm View Resort.

The documents attached outline that SDTIBM (Tourism Development Corporation of the island of Boa Vista and Maio) representing the Cape Verde Government, have signed a declaration forming a partnership between SDTIBM and Ciaran Maguire Group for the development of the tourist development project under the name Palm View Resort.

I have also attached pictures of the machines now on site, I was supposed to be there for the PR event on the 19th of April when the machines arrived to Boa Vista however due to the disruption with the airlines I have had to postpone my trip until the 3rd of May, I can confirm however that machines have arrived and works have commenced on Palm View Resort despite the very clear and disruptive sabotage campaign against my Company. Under difficult circumstances I have delivered and most importantly protected my client’s investment.

I think it is very important to note that I have signed a contract with a new bond company Provident Capital Indemnity (PCI) to underwrite the Palm View Resort and I am very proud to say that the Palm View Resort is the ONLY development in the world to have the Guaranteed Rental fully bonded with the financial market place in London hailing the brokering of the deal as a “pioneering product that will change the overseas property market for good”. I understand that the previous bond company we entered into a contract with has now gone into administration that is why I personally outlayed in excess of €100,000 on carrying out a full financial report on PCI via Dun and Bradstreet, a market leader in carrying out financial reports on Finance and Insurance houses and the report shows that PCI have assets in excess 250,000,000 USD and deem to be very secure as an underwriter for Palm View Resort.

On a personal note I would like to say that on the back of works commencing on Palm View Resort, I will be creating 25 new positions based in Dublin within my Company and a further 15 positions in the first quarter of next year as well as 1300 positions for the construction of the resort. I believe that we need to back entrepreneurs and avoid putting obstacles in their paths as we are fundamental to getting Ireland back on its feet.

I anticipate your next question to be” what about the clients looking for refunds etc”, I would like to take this opportunity to outline the actual facts rather than uneducated guesses that appear on forums. As I mentioned the previous bond company we entered into a partnership with has now gone into administration and effectively taken nearly a million euro of clients premiums and it is these clients who are looking for refunds even though there money has gone to Exchange Bond and NOT my Company. I have given the clients an undertaking that I will personally repay their deposit even though Begbies Traynor (Administrators appointed for Exchange bond) have formally informed me via a written letter that I received a few days ago that I will not receive any compensation for the loss of nearly 1 million euro as the first people to get the assets of the company will be the banks (surprise,surprise). I made a commitment to these clients and I will refund all clients however this can be a 4or 5 month process as Ciaran Maguire Group’s credit line facility is structured to be tied into stages of construction.

I think it is worth pointing out and I hope you agree that with all the unethical codes of business our country is practicing between the banks, the Developers and the politicians that I am being extremely harshly judged. I set about building a stunning development in a stunning location and through very difficult times have achieved my objectives and formed strategic relationships with the Government of a country that I believe to be the European Caribbean and believe is destined to become the number one sun destination for Europeans over the next ten years, and since signing our partnership agreement, Ciaran Maguire Group will become the biggest developer in that region.

I understand that some clients have lost money through Exchange Bond but I personally have been left with bonds with a value of nearly 10 million euro that is now worthless to me. I will still undertake to refund every one of our clients as it is morally the right thing to do. The clients that have stayed with Palm View Resort have done so because they know me personally and knew despite the adversity I would deliver and subsequently since the commencement of construction and the introduction of the new bond company, there investment has now increased by approx 27%.

As a leading entrepreneur of this country who wants to create success and new opportunities as well as creating employment I would urge you to support Palm View Resort. I do understand that you have to ask certain questions and by all means ask any relevant questions, but myself and my personal associates do find some of the comments posted on the forums highly offensive as my only objective is to build Palm View Resort and I am now happy to say that despite the delays and frustrations the first 6 blocks, 28 villas and the Palm View hotel looks set for completion by the end of December 2011.

I would also like to say that as part of the partnership agreement I have with the SDTIBM, I will be constructing a new school for the island as well as hundreds of social homes. Ciaran Maguire Group looks forward to a very fruitful relationship with the Cape Verde Government as well as the people of Cape Verde. Our plans and partnership agreements means we will be developing in Cape Verde for the next 15 years.

On a final note I would like to comment on an issue that appeared in the national paper and indeed your forum in regards to an outstanding issue I have with a recruitment agency, without going into to much detail, the amount in question is very nominal but I refuse to pay something that is simply not justified and in this case the agency provided me with someone that was sacked after 16 business days for theft within the company. The agency still requested a full payment on their invoice which I contested, I offered a payment which I deemed to be fair however it was rejected and subsequently the matter went before a court and the courts agreed with my case and a settlement payment has been finalized. I think its worth pointing out that on the day this story appeared in the press and subsequently blasted all over the forums, I was actually signing contracts with the builders for the commencement of construction on Palm view, an agreement worth tens of millions and which as outlined above will create new opportunities and many new jobs as I will be implementing Irish project managers and engineers on the project. This deal was greeted with great joy and optimism in Cape Verde however there was “nothing” positive written or said back in Ireland and I believe that the constant negativity being displayed not just about my project but anybody who dares to be successful in these current times will have a major impact on this countries entrepreneurs. I was invited to the entrepreneur expo in the RDS on Friday last were I met with Gavin Duffy who has extensive experience working within the press and as a key note speaker, he emphasized the damage the negative press was having on our country and actually urged entrepreneurs to remain focused and avoid reading the constant negative press.

I do recognize that some mistakes have been made on Palm View however this was due to my Company receiving assurances that final planning would be granted within 3 months of commercializing Palm View and it has subsequently taken 22 months which is frustrating for everyone and then the moving of the location which was done for no other reason than we were informed that if we moved to the south of the island there was less red tape and planning would be finalizes sooner than on the plot on Chaves, this turned out not to be the case but we were informed of this directly from the head of State Patrimony in Cape Verde, again I have to stress that our objective was to commence works on Palm View and to develop a Resort in what I believe to be a stunning location and to create success for our investors and for my Company which we have now managed to do.

I welcome any more relevant questions and hope that the outlined good news story reaches your audience. God only knows this good news is long over due.

Anthony Joyce is on the case of another high profile overseas property development, namely the Palm View Resort in Cape Verde, sold by Flash Developments and run by Ciaran Maguire. You'll see previous posts about Mr. Maguire and his 'Palm View Resort' development here.
Joyce, who has made somewhat of a name for himself in this niche industry - having taken on such high profile overseas property cases as Kuvera, Larionovo and Simple Overseas Properties - has been appointed by a group of Irish and British investors to recover their funds from Flash Developments and its owner, Ciarán Maguire. Joyce is looking for investors to come on board so that the cost of any action can be spread out among as many affected investors as possible.
Joyce's contact number is 00353 (0)1 4545 000 and the website is www.anthonyjoyce.ie.
No comments: