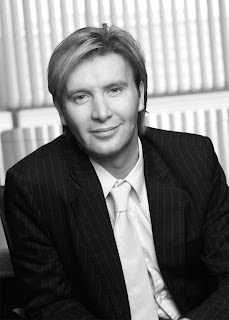 Well praise be for a little positivity in the world. We've been looking for it for a long time and, at last, we've come across a company in a positive frame of mind when all others are losing their jobs, houses, cars, shirts, etc.

The Ciarán Maguire Group has suddenly - and we mean very suddenly - announced itself on the Irish (and we believe world) stage to all and sundry. At a time when most newspapers in Ireland couldn't sell an ad to save their lives, along comes Ciarán and his group and starts advertising liberally, everywhere, even on the Late Late Show.

If nothing else, you've got to admire the guy's 'liathróidí', (Bill Cullen's new catchphrase), or 'cajones', depending on where you come from. He is spending an awful lot of money in a market where nothing is moving, not because people don't want to move, simply because they can't - nobody can raise funding for very much (unless they're sitting on a mountain of cash a la Warren Buffet).

We would have to add a proviso here though. Not everyone is all that wonderfully excited about Ciarán's assuming the throne as the crown prince of overseas property in Ireland. In fact, some have gone as far as to say that his proposed six-star Palm View Resort on Boa Vista Island in Cape Verde is not all that it may seem.

Questions have been asked about such items as the quality of the development, the price it is being sold at, whether the development has planning permission, the ability to land a 747 at London City Airport (I kid you not), etc. Suffice to say that the whole topic is getting a good and proper airing.

We're not giving any opinions on this one at the moment, we simply don't have enough knowledge on the subject to do so. If anyone has any further information on Ciarán, his father Christopher Maguire, and the group in general, we'd love to hear from you.

In the interim you can take a look at the following links - some positive, some not so positive - and make up your own mind.

The Ciarán Maguire Group - the groups own website - we're wondering if Warren Buffet has copyright on that opening paragraph.

Palm View Resort - site for the development in Boa Vista, Cape Verde - the link from the Flash Developments site leads to a parked domain for some reason.

Ask About Money - discussion about Cape Verde which has diverted to a discussion of what The Ciarán Maguire Group is, or is not, about to do on Boa Vista.

The Property Pin - Similar Cape Verde thread to the AAM one except this one started with discussion of the Palm View Resort and it's proposed developer.

The Inside Goss - Blog querying what is going on with the Ciarán Maguire Group and its development/s.

After that please make up your own mind on what Ciarán and his group has, or does not have, to offer.

The Ciaran Maguire Group welcome any questions people may have. you can contact our office by phone.

We have tried to provide updated information to overseas cafe, but it appears that our emails have been blocked.

Ciaran, emails have not been blocked, there appears to have been an issue with one which didn't get through, but this seems to have been a technical issue outside of our control.