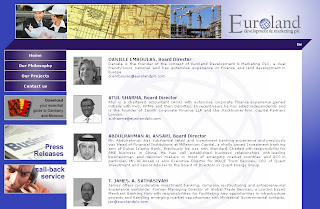 It would appear that rumours bubbling under the surface about the company best known as Fortuna Estates have proven to be correct judging by events last week.
Mark Stucklin reports in his Spanish Property Insight website: "The Spanish land investment scam run for years by Fortuna Estates has finally been busted, with the Spanish fraud squad swooping last week on several office in Mijas and Fuengirola, arresting at least 2 people, and questioning 20 others. This could be one of the biggest Spanish property scams to date, with hundreds, if not thousands of British and Irish victims. The Spanish authorities estimate that Fortuna Estates made at least 65 million Euros out of this fraud."
The company ran its operations over the past number of years under a range of pseudonyms including Fortuna Land, Euroland, Sol y Nieve, BPA Blueskies and ultimately Oanna Group. It sold a number of land developments including Bella Fortuna, Sierra Fortuna and Cazadores Reales. Investors were informed that the companies had submitted planning applications for a number of projects including hotels, a wedding chapel, a retirement home and a solar farm.
The Spanish press has reported that there could be more than 2,000 victims, mainly middle class investors from the United Kingdom and Ireland. The company's modus operandi was to promise victims high returns based on land reclassification on projects purported to be in operation in rural Andalucia. Many of Fortuna’s victims invested the minimum amount allowed, which was €10,000, but many others will have invested far more substantial sums than this.
Fortuna Estates first appeared on our radar in 2002 and has, since that time, been an ever present at multi-agency exhibitions across Ireland and the UK. The company also ran high profile marketing campaigns in the press. It denied strenuously that it was a 'boiler room' operation (a telesales office set up simply to promote a useless/fraudulent investment vehicle), an accusation that had been made against the company on the back of many similar scams relating to land banking operations in the UK.
Fortuna offered clients ‘shares’ in greenfield projects purporting to turn land in out-of-the-way parts of Andalucia into commercial property investments. It is not yet clear how many Irish investors are affected, but it will certainly run to many hundreds.
Mark Stucklin also reports: "The Fortuna Land scam was run out of offices on the Costa del Sol using companies registered in places like Cyprus and Delaware (USA). Currently the Fortuna Land website (fortunaland.es), claims they have “implemented a strategic relationship with The Oanna Group to realise your investment projects in Spain,” and instruct visitors to direct all future communications to oannagroup.com. The Oanna Group appears to have its main office in London.
In November clients visiting the Oanna Group website were informed that the company had moved its "international office from Spain to the UK" claiming "it previously provided outsourcing services to clients on mainland Spain through offices owned by Fortunaland SL." The notice went on to say that "with the downturn in markets it has not proved feasible to maintain separate offices" and was "focusing on centralising activities from the UK." It also claimed "that there are significantly better opportunities to access capital in London." It said that those who had been dealing with Fortunaland SL should direct their enquiries to "their management / representatives and/or company lawyers."
The address given was: Oanna Group UK Office, 3 More London Riverside, London SE1 2RE with a phone number of 0203 283 4090. The notice finished with the following statement: "With the onset of the credit crunch there are a number of lucrative opportunities in commercial and residential property worldwide. We are also developing some exclusive distressed property products and will provide our customers and clients access to these products. Please refer to the website www.oannagroup.com for further updates."
The Spanish police think that the main directors have already moved overseas. In a cruel final insult Fortuna Estates' investors are now being targeted by a new scam. This particular ruse involves a company contacting investors promising to attempt to recover money paid to Fortuna/Oanna for a fee of 10% of the original investment, paid in advance of course. The company involved in this particular operation is called European Mediation and has an address at Jaguar House, 6 Harthill Street, Manchester, M8 8AG.
When contacted by OverseasCafe.com questioning how it had managed to come by Fortuna Estates' client database European Mediation gave the following response:
"Our service is to mediate where there has been a dispute which has come to an impass (sic). Clearly we must maintain confidentially (sic) at all times, as required by the rules of data protection. But also by keeping matters out of the public domain we are able to be more effective. Due to the nature of our business we trust you understand the Companies (sic) response."
Indeed we, and others, do understand the company's response all too well.
You'll find a number of forums and articles discussing this issue, here are a few:
Spanish Property Insight
Ask About Money
The Singing Pig
House Price Crash
Fool.co.uk - scroll to the end of the article
Fool.co.uk - supplementary message board set up for Oanna victims as comment system on previous link reached capacity.
Investment Property Rumours - Excellent background on this scam
Rip Off Report

For a selection of property from around the world click here.

For a listing of agents selling overseas property click here.

For news on the world of overseas property click here.

For new releases and product updates from agents around the world click here.

The story behind Fortuna and Oanna is elaborate to say the least, This is likely to go on for years and years, the people behind it all have already run similar size scams before and got away with it.